Please check this playlist for comprehensive videos explaining everything in this article:

Temp Controls are special Anim Controls that help animating faster, more intuitively and with more precision. It creates powerful featured and non-destructive Anim Controls, that drive original rig controls through parent constraints. User can either keep the setup in the scene or bake it down after using it. This unleashes the power of:

If you didn't understand what that means, don't worry, it will make sense when looking at some examples below. Be creative, though, find how this tool fits into your own workflow! Just keep in mind that:

What Temp Controls don't do

They don't deform meshes, directly. They only drive existent rig controls, that then deform meshes. This makes it compatible with pretty much any pipeline, as the only thing that it needs to support is conventional parent constraint, which any decent pipeline already does. Even in worst case scenarios, if the pipeline is 100 years old and doesn't support constraints, you can bake Temp Controls before publishing your shot and downstream departments won't even notice they were used.

Currently there's three systems available, but many others are planned for the near future: 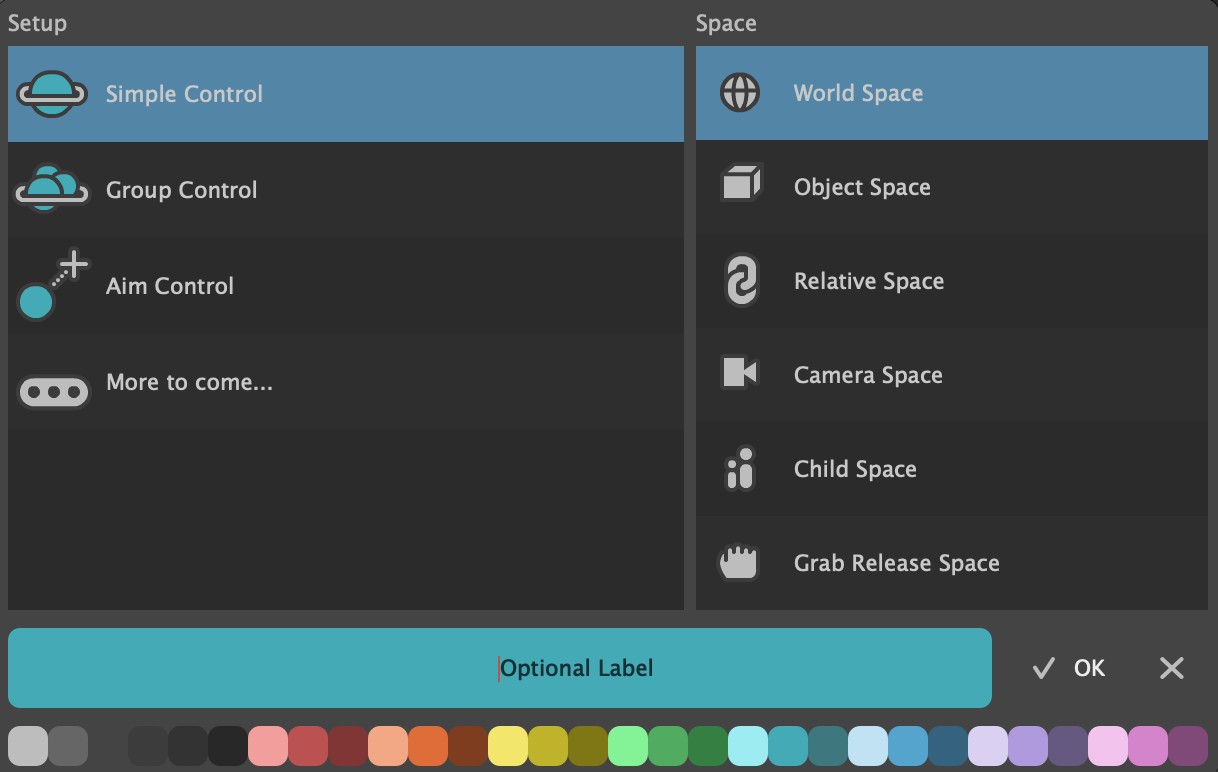 A simple Anim Control. Although simple, it's probably the most powerful and versatile. Because it's powered by Temp Controls features, the possibilities are endless.

A master Anim Control that drives many others. It's a great setup to move and reorient several objects together. This is different than using animation layers, Temp Pivot or Global Offset, because it is applied at parent level.

An Anim Control with its orientation controlled by an aim target and a pole vector. Great for animating position without counter animating rotations.

Temp Controls can be used temporarily, but also be left enabled in the scene, if desired. There's two different baking modes: 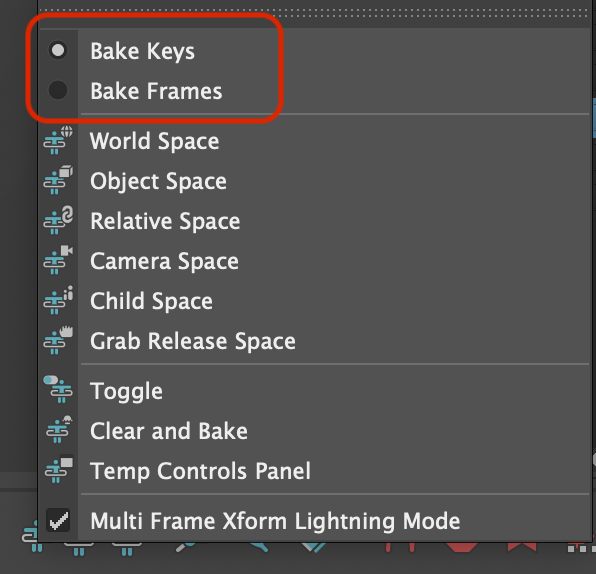 Toggle will bake the Temp Control animation back to the rig control, but will keep the setup in the scene for later use.

This will bake the Temp Control animation back to the rig control and remove the setup in the scene.

Pro baker tip: run this command without any selection and it will bake all Temp Controls in the scene!

A key thing to keep in mind!

It's important to understand that whenever you create, toggle or bake Temp Controls, the animation will be transferred in xform state, meaning that all translations and rotations will be keyed in order to keep the pose in place during the space switch translation.

Switching spaces is probably the most powerful feature of this tool. There's a few different places where you can set it up.

Some spaces can also be accessed through ALT, SHIFT, CONTROL shortcuts. For example, Shift+Ctrl+Click on the main Temp Controls button, will set the selected Temp Control to Camera Space: 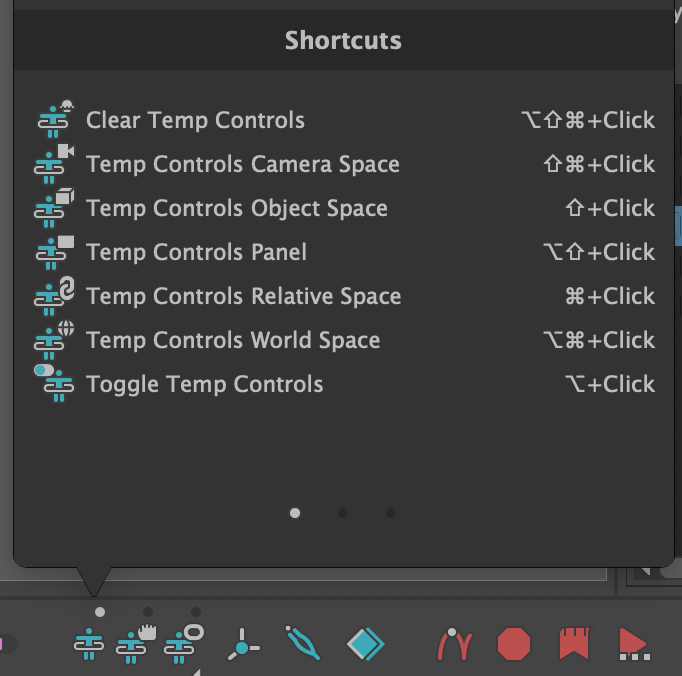 You also have the ability to set a space for position and a different one for orientation, by clicking on the lock button in the Temp Controls Panel. 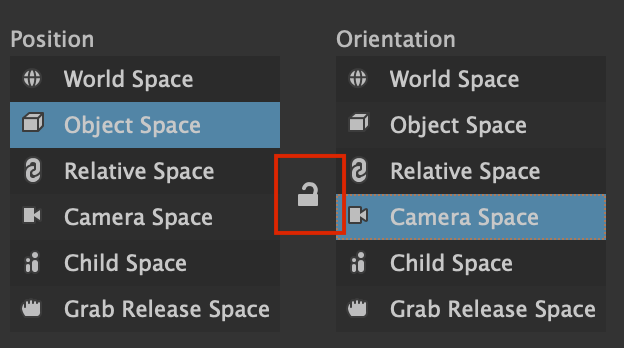 This is a very special space, as it allows the Temp Control to be in different spaces at different frames in time, which will be displayed in the timeline:

It's important to note that you can grab anything you want at any time you want (no judgement!), changing the drivers at will, and the poses will stay put wherever there is a key.

TIP: If you nudge keys with animBot's nudge tools, the grab frames will go along with it!

Releases the Temp Control, so no objects will drive it from the current frame onwards.

There's a side effect that happens if we change the pose of an object that's driving the Temp Control at the frame where it starts driving it (the grab frame). This will create a pop, because the transition between the previous driver to this new pose needs to be recalculated at the new position. Normalize Transitions will fix those pops. Feel free to smash this button as much as you like, Grab Release will always keep your pose in place where there is a key.

* We can also assign this to a hotkey (pretty much any other animBot command, for that matter).

Whenever an object is following another, either when being its child or by a parent constraint, its local axis will reorient through time, according to how the parent rotates. The problem though, is that we usually want the Y axis to be pointed up at release moments, so that we end up with clean animation curves as opposed to a mix diagonal.

This command will align the Temp Control axis to world at current frame. By default, animBot will normalize the Y up for the first release, automatically. Running this function becomes useful when the Grab Release setup has 2 or more releases.

They have a few special properties.

We can control a few appearance properties of an Anim Control, such as size, orientation and shape.

We can add extra child or parent controls, to allow us to have an extra layer of animation.

This is a very powerful feature, as it allow us to change the pivot position without destroying the poses. After changing the pivot, the poses will stay put at wherever there is a keyframe. The interpolation between those keyframes will change, obeying the new pivot position.

If you are into scripting, try using animBot API for the Temp Controls to automate repetitive tasks. Visit this link for more info and examples: createTempControl

Remember: we can set hotkeys to any command available in buttons and right click menus. Once you find something you use a lot, set a hotkey for it to speed up your workflow even more!

A
Alan is the author of this solution article.

Did you find it helpful? Yes No

Send feedback
Sorry we couldn't be helpful. Help us improve this article with your feedback.